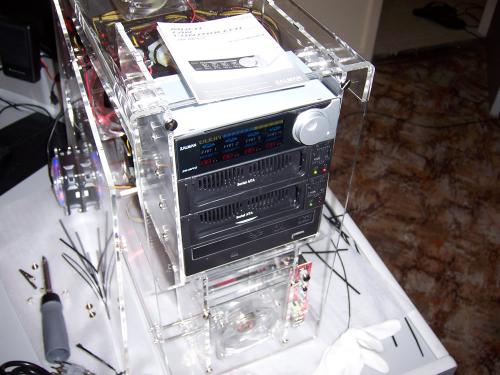 Finally done with my computer. It took forever for the parts to arrive, especially the 8800GT which gave me immense amounts of headaches when it came to dealing with the ultra-stingy shopkeepers. -.-; Make sure you do not buy from any shops owned by Chinese people, even if it means there are lots of them around and they sell stuff at supposedly dirt cheap prices which are actually miles above the actual cost prices. >.>

When work gets in the way with your usual anime-loving life, you know you need a break and start doing things that you like. Last month I secured a figure that should by then have been extremely hard to find since production has stopped and its made by Max Factory. Yeah, the 1/8 Shana that I was eyeing ever since I was a child. (Okay maybe not) So I decided to commemorate the completion of my new PC to open up the Shana box and give her a bit of a modelling session. This will be relatively educational for all those of you who haven't gotten your hands on this figure yet. Make sure you do not regret for the rest of your lives. Pictures after the jump...

Previously, I didn't open the box that arrived because I didn't feel like it was the right time. However, now that I got a PC that emits a ton of red light, I suppose it won't hurt to bring Shana out into the sunlight, so I got my knife and tore away at the plastic wrapping around the box.

The printing on the back of the box has a nice picture of the Shana figure from the front and back, as well as all sorts of copyright notices, warnings and instructions and the usual 15 year old and above sign. I just wish the real product actually had a transparent stand. It turned out to be black.

The sides and front of the box were basically just transparent windows with printings of the figure on the corners and the big words Shakugan no SHANA.

Can't see much of Shana from outside the box until we actually open the box up eh? So let's just do that.

So we open up the cover. Its a pretty uneventful cover, with a white back, but when I tried to open it it was stuck. Apparently its secured with a short strip of cellotape. Cheap? Guess so. Then again, its the stuff inside that we want, not the packaging.

The figure is suspended in a large sheet of plastic moulded to somewhat fit the figure and the Nietono no Shana. It actually looks halfway decent and offers relatively good protection to the figure from shock.

A close up of the packaging. Looks like the figure is covered around with some small bunches of plastic bags. Must check it out later. Apart from that, it seems my rough handling has deformed the protective plastic frame a bit. ^_^;

The plastic suspender is made up of two pieces, one on the front and one on the back and are held together by again, short strips of cellotape across the sides. there were about 8 of them all together, and it was a real pain to scratch them off, so I used a knife. No, I did not accidentally poke the figure ~_~

After a few minutes of wrestling the figure out of the suspender and messing around with Shana's body parts, I finally was able to insert it into her. It was pretty tight, but I can expect no less from the hottest (literally) loli on the planet. Xak told me to be really careful with the katana, so I did, but it took a while to find the hole so I blindly stuck it around the edge of her head until I found an opening in her hair that I could push it through. After I managed to do that however, getting her to hold the sword is even harder than convincing the police you are not a pedophile after coming out of a room with a little girl sitting alone crying and half naked.

Here's a shot from her back. This is how the sword comes out. Remember not to punch your own extra hole. She won't like it.

Its quite interesting to note how feminine she looks with the thin arms and narrow shoulders. The way her head is tilted against her neck only serves to enhance this impression.

I must admit that seeing her dominating posture from behind is quite a sight. The artist and sculptor have done an impressive job of making the figure stand with a very natural posture.

I realize the model was sculpted to look like a certain picture drawn by Noizi Itou. Either way, Max Factory has produced a figure that is nothing short of awesome.

Even the legs look good... yum. You can see the gradient on the hair in this picture. It slowly fades from red to yellow as it reaches the edges.

Only God knows how they coloured this. The gradient gives the impression of illumination from below. The hair gradient gives a pretty nice effect in the light too.

Another picture of Shana from the side. The ribbons seem to be flying everywhere with her. I wonder what's up with that. It is probably to give the effect of a very strong updraft. *shrugs

No matter what angle you look at her at, she is simply tastefully awesome.

The pictures were taken in the evening. So a couple of hours later, I decided to take some pictures of her in the dark, when the LED lights from my PC starts to dominate. Of course, I closed the curtains to prevent the moonlight from messing up the lighting. This is a picture of her with flash turned on.

First attempt at a night shot. I am not really happy with this picture because you only really see her hand, and the light shining upwards didn't really bring forward the effect I expected. Maybe I should try another side of the case.

This is much better. By setting a high exposure I managed to increase the intensity of the LED glow in the dark to a much higher level. If course, the actual amount of light makes it relatively difficult to find your feet. Only several minutes after I took this picture did I realize my LCDs were too bright for their own good.

A shot from the top. Shana has a slight blue hue reflected off her, giving a really nice effect.

Hold it right there! I am the terror, that flaps in the night... I am the flame that burns all your evil plans!

Shana enjoys the heat emitted from a heavily overclocked CPU. Of course, it was meant to look much much hotter than it normally should. Just in case you are curious, the air blowing out of the heatsink is cold. Believe it or not.

Shana rules the world. I reckon this is the best picture ever. The strength of the light and the blue hue gives quite a dramatic feel to this picture. However, the biggest surprise after taking this picture was how well the hair emitted red light. The almost seems as if they really were red-hot.

And, to commemorate this, I vectored a wallpaper which I will post sometime soon XD. Check this space.