I did not know L was into girls. 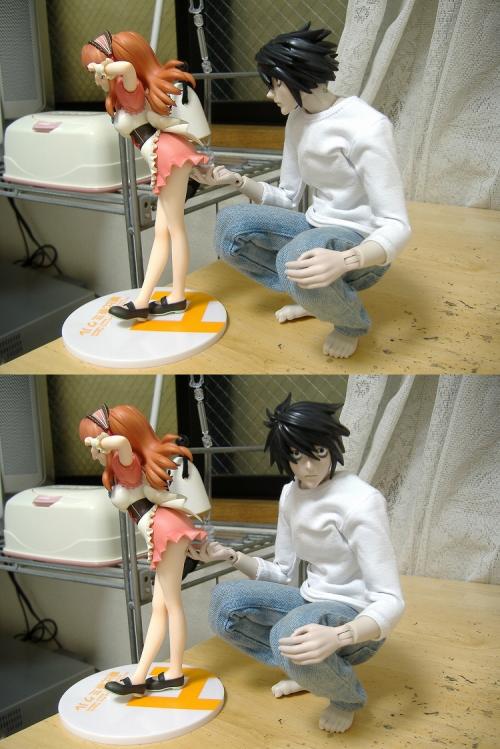 I used to think he was gay, that's why he could not face the fact that Light was Kira. Oh well, he's proven me wrong. This season really is turning out to be one boring season. It's winter and there's nothing to watch. The anime companies must have their asses frozen to their chairs this winter, preventing them from ever getting up to sharpen their pencils. After watching H20 for a short 2 episodes, I got so sick of it I decided to throw up and forget about that anime.

I mean, come on, seriously, Spirit of the Sounds of Time Otoha-chan? Man, that makes King of the Meanest, Baddest Intruders of Soul Society sound good.  Did I mention the anime has a lousy series progression and an even lousier plot? In episode 1, (don't worry this won't spoil the anime one bit, because it has already been hacksawed into a million ugly pieces of FAIL by the producers in just TWO episodes, they probably are the record holders of fastest rotting anime ever) the boy of the harem is blind. That's it, the rest is rubbish. Then in episode 2, the boy can see again! As if Jesus came down and told him to see again. I mean, if that was the case, why didn't they show it? What the hell is up with him suddenly waking up the next morning and suddenly have fully functional optics?! It's like Makoto coming back to life after being stabbed by both Sekai and Kotonoha. (Actually I'd love to see that, and before he dies of pain and suffering while he looks at the two deranged girls whose virginity he took away, he must drown in hot boiling oil.

UGH... This is the worst season ever. I shall now stop ranting and watch this season's only saviours, CLANNAD and Shana. *ciaoz