This is a Hayate post. Those of you eagerly awaiting season 2 are given a small appetizer of what's coming up in this OVA. For those of you who are waiting for subs however, don't continue reading since this post is just going to spoil it for you. This post is just a post scraping together what little win the episode has, and turns it into a collection of the meagre memories of the entre to the 2nd season.

There are lots of girls in this episode to cover for fanservice, but only a few got relatively extensive coverage. Even so, the fanservice levels in this episode aren't high or anything. This is weird considering the episode has no real plot at all. Just a silly day at the beach(in the mansion grounds) and Nagi refusing to go swim and a ghost possessing her. That's all. In other words, this episode was almost a waste of time, if not for the Hinagiku win scenes in the story that make the episode worth watching.

Hinagiku, upon arriving at the Sanzenin Mansion suddenly goes all dere dere when she thinks of how this is the first time she's come to Hayate's house. Man its so cute, I could root for a Hayate x Hinagiku ending all day.

Just look at her. Her heart probably is pumping half her body's blood into the head. And look at those narrow pupils. Its incredible how captivating her snakelike eyes can be. Sinister as she looks, she is possibly the cutest and most likeable character in Hayate no Gotoku. 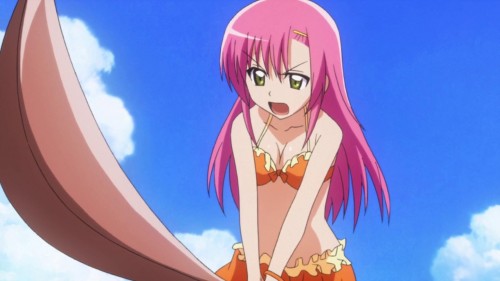 Hinagiku with a sword. 100 points. As I've said before, girls with weapons are generally attractive because of the human instincts nurtured over the years when we were still barbarians.

Of course, she hates high places. I also have altophobia. Just not as bad, but I wouldn't dare do jumps into a pool from diving boards that are so high. It would just freak me out.

And now, (I know you guys have been waiting for this). The Jackpot. Somehow this made me a little angry for some reason. I think its because Hinagiku is one of the few anime characters I know of that really should not be defiled. But then again, what defence has a man against his carnal instincts? 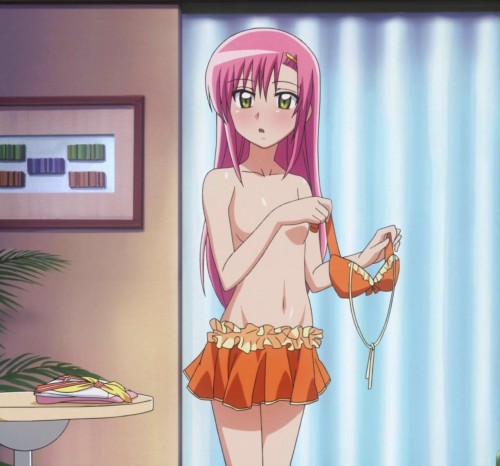