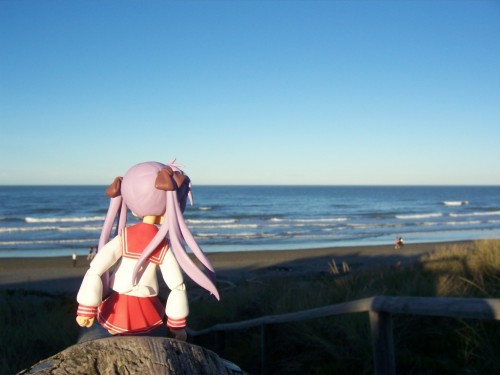 Christchurch is a city that sits right next to the pacific ocean. Although most of the human activity happens about 10 miles inland where the city center lies, many people from this city love the beach and visit it often. Since its been a while I went to the beach, I decided to hop on the highway with Kagamin to have a little walk on the edge of the sea, instead of watching anime this evening. 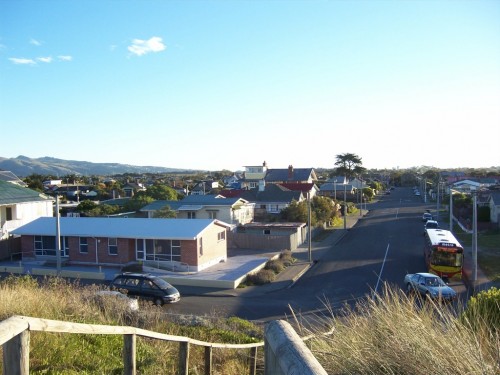 There are two major beaches in Christchurch: Sumner Beach and New Brighton Beach, and believe it or not, there are no big resorts sitting on these beaches. Just small quiet neighbourhoods and big beautiful houses sitting on the cliffs. New Brighton beach, as the name suggests, is named after Brighton Beach in England, and has a pier that goes all the way out to sea too! 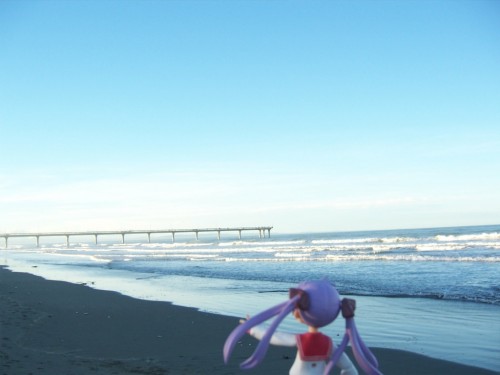 Kagami wants to go to the pier. 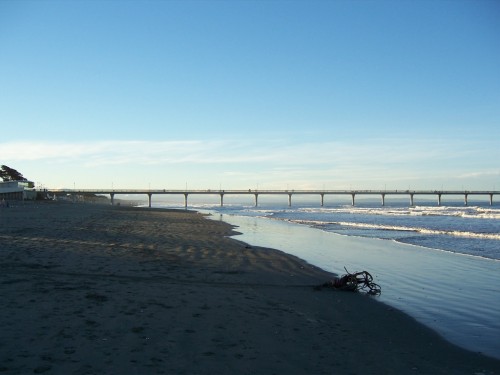 There's a library and a bar/bistro at the start of the pier just up the bridge. The library's got XBoxes and PS2s in it for people to play when they feel like relaxing after a whole day of reading. Unfortunately it was closed when I got here. I'll probably come when its open next time. 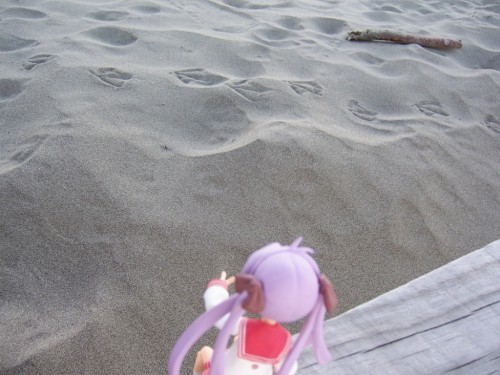 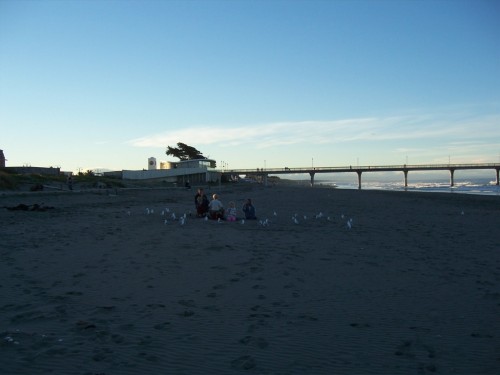 In fact, there are so many of them that whenever you sit down with a pizza and want to have a picnic, a massive fleet of them just swoops down on you and asks you politely for a share with big seagull eyes and a kiwi accent, in seagull language of course. 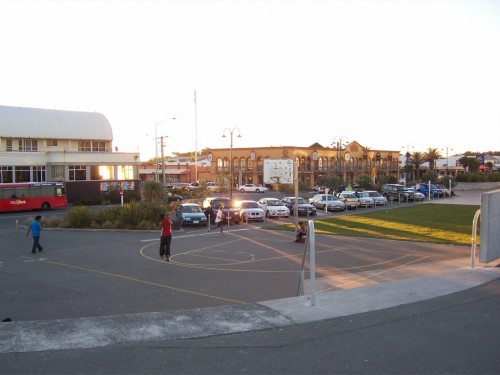 Fun basketball playing with the locals. People come regularly to exercise at the beach since New Zealanders, specifically men, are very conscious about their health and are always seen performing some sort of physical exercise outside. 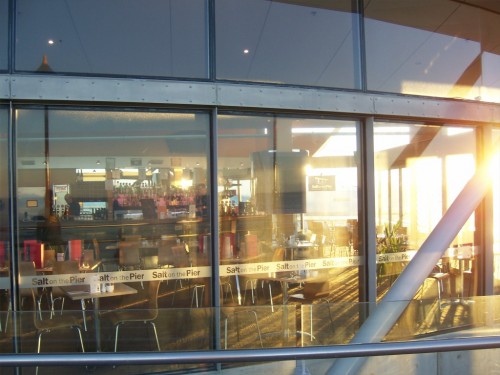 Salt on the Pier, the bar at the end of the pier. There were some REALLY good smells coming out of this place when I was walking back to my car. I must come here to try the food sometime. I wonder who I should bring next... 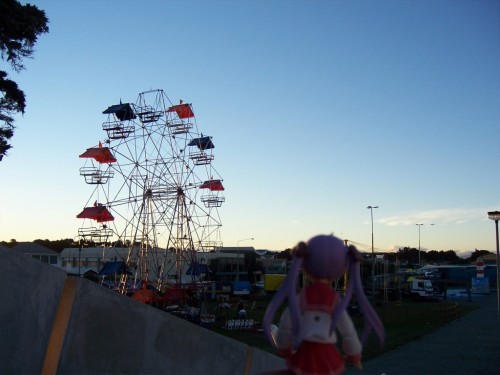 Kagami noticed they were building a fun fair here near the pier and begged me to bring her on the second trip here to try the rides. They've already set up the ferris wheel and some merry go rounds. The ferris wheel looks pretty framey though, I wonder if it will hold my weight. Maybe its because its still under construction. 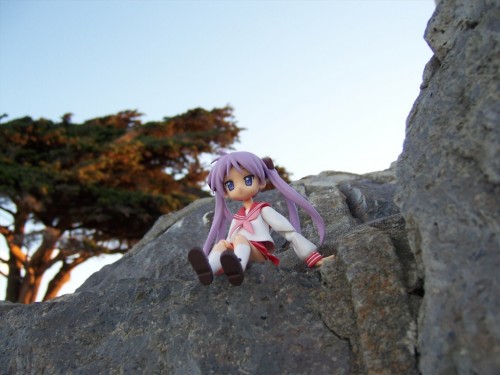 Kagami looks out to sea while I ran off to the toilet to loosen up. She really wanted to go to the pier, but I told her that I was saving the best for last. 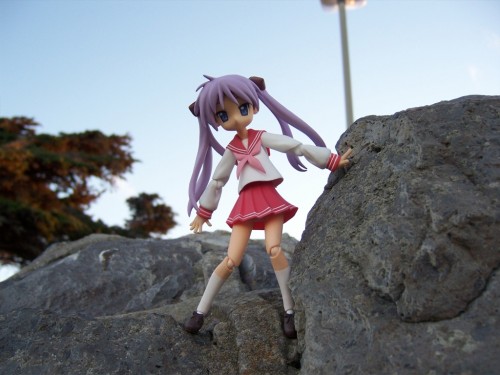 She hurried down the moment I came back. 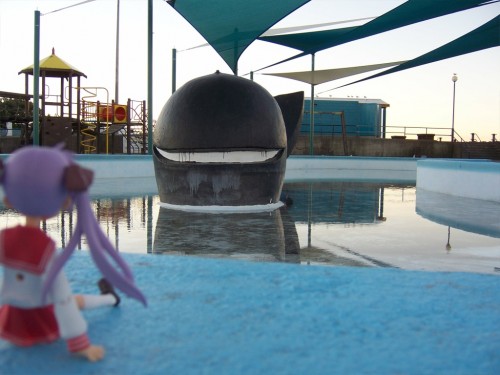 We also met Mr. Whale at a nearby playground. 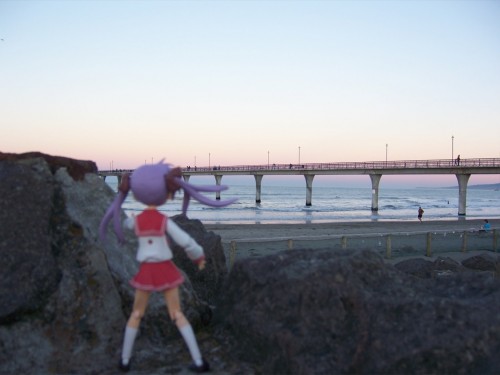 Right, it's time to go to the pier! Kagami's hair is blowing all over the place because of the strong wind. And I'm not making this up. The wind WAS really strong! I was afraid that it might blow Kagami away from me. 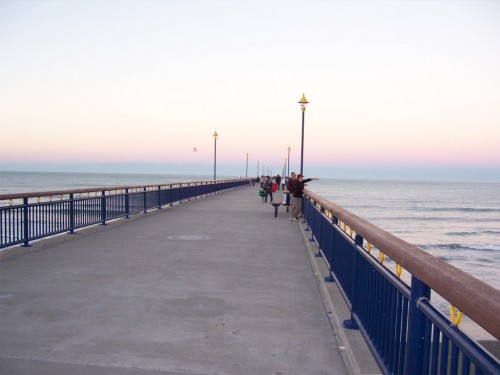 Heading up the pier. 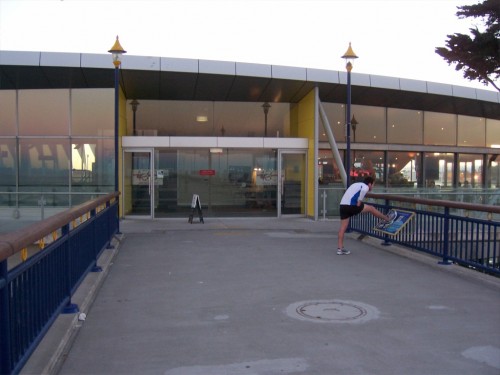 Looking back... That's the main entrance to the library. 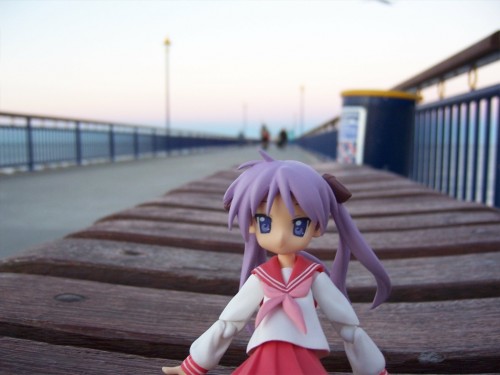 The pier is quite long, so we decided to go at it slowly and take our time while enjoying the horizon. 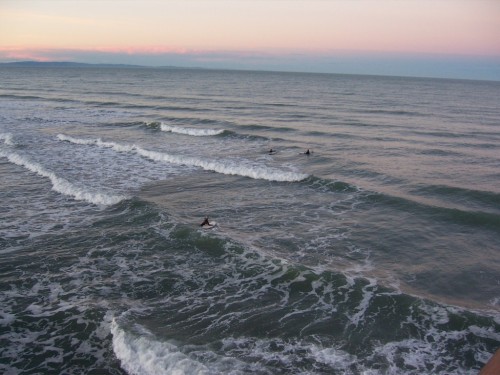 Many people come here to surf the waves too. While the waves aren't the biggest around and the water temperature is pretty close to freezing, I still see quite a significant number of people surfing the waves everytime I come here. There were about 10 people on each side of the pier surfing. o_o 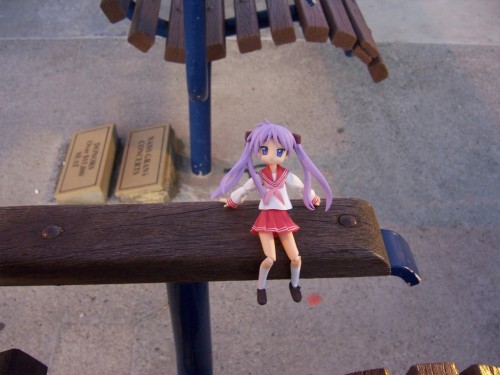 We sat down because Kagamin wanted to tell me a joke. I laughed very hard, but I can't remember the joke. It must be true that good jokes are hard to remember. I'll tell you guys the joke when I remember it again. 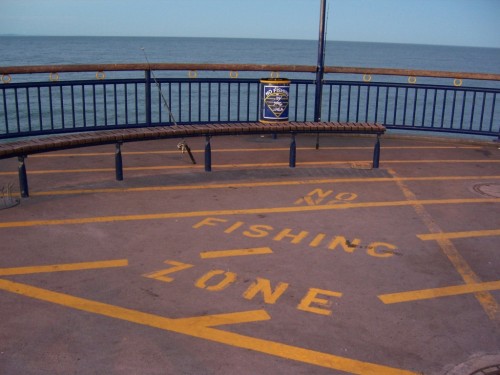 We've reached the end of the pier. Its funny that we still see fishing rods at the No Fishing Zone. I guess that paint was there just as eye candy for us bloggers to laugh at. 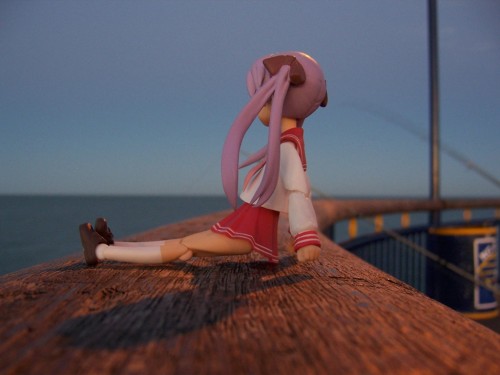 We sat down and stared at the horizon. 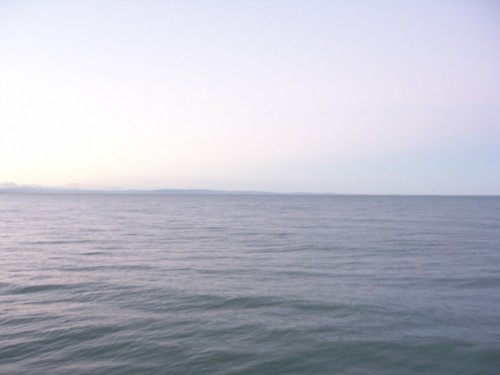 The Pacific Ocean is quite featureless. 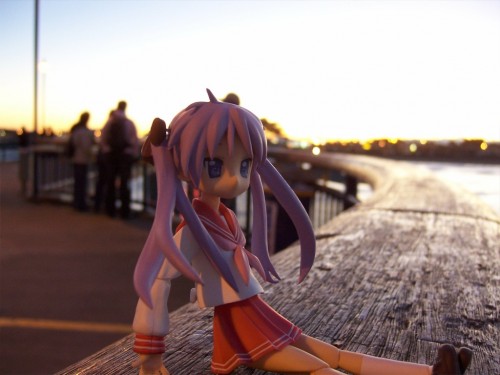 "What are you looking at?" 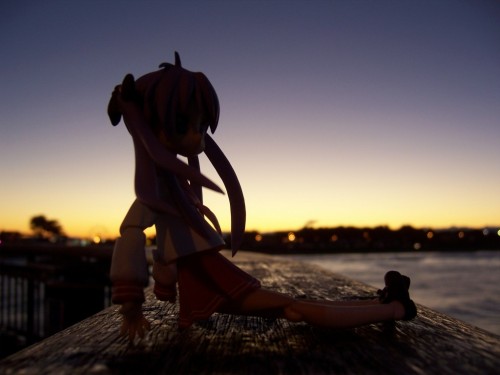 We sat there till the sun had pretty much set. Then, we decided that it was getting cold and late. My stomach growled, so I knew very well that mother nature herself wanted me to go home and have dinner. 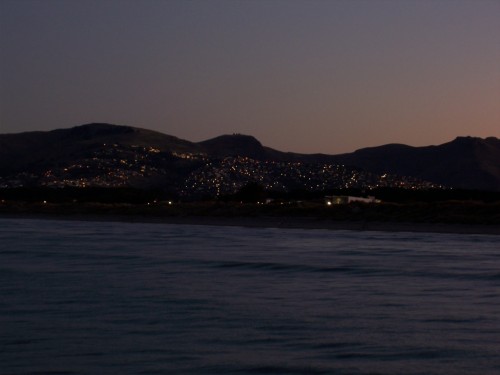 Here's a photo of the nearby hills. The lights represent the communities that live near to the sea. The residential land prices near the beach are quite high, ranging from about 600k NZD to more than 4 million. I'm not sure of the plot sizes, but they can't be very big either by just looking at the house sizes. 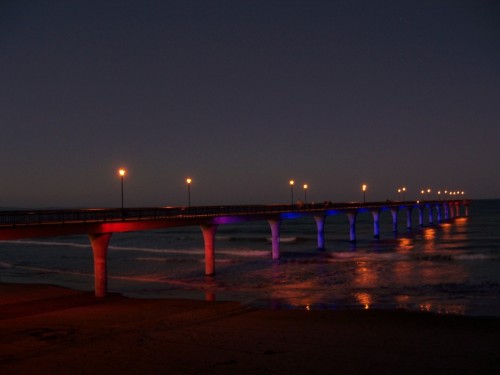 After walking back from the end of the pier, we noticed the lights that lit up the bottom of the pier. They were really pretty from where we stood. 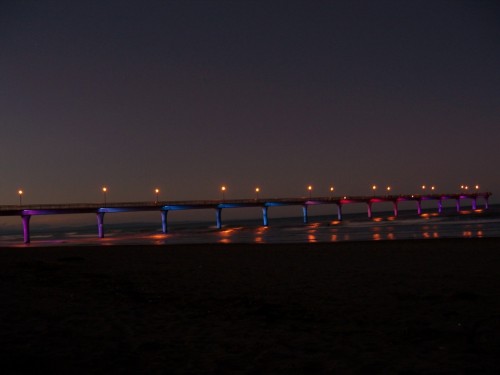 The coloured lights under the pier constantly changed colours like a rainbow, so it gave you the illision that the red was moving towards the sea, followed by the orange and the yellow. 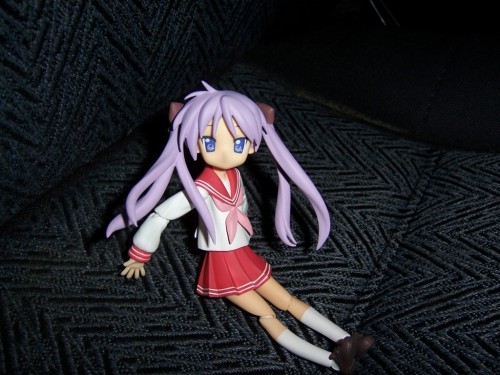 Telling Kagami to buckle up so I can start driving. 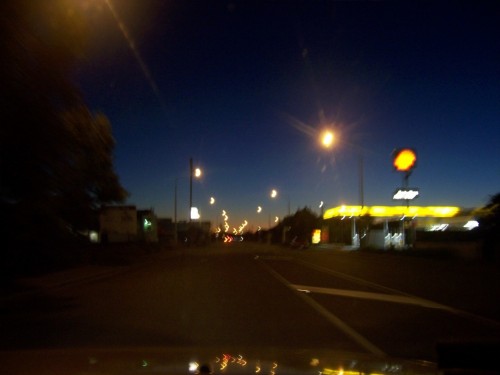 This is what the town near the beach looks like. Its pretty much desolated at night. My camera isn't the best so please forgive the motion trails. 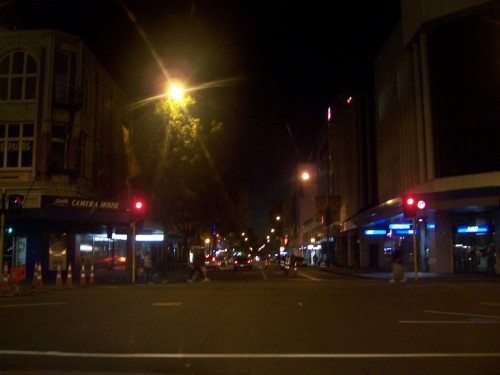 Woot! Back in the city. It was surprisingly lively tonight with all the people around. Do you go to the beach often like kiwis?