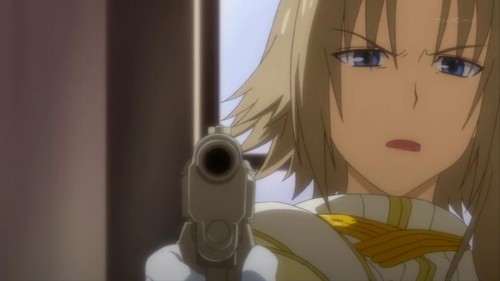 I felt inclined to say Asura Cryin is awesome after the 2nd episode, but after watching this 3rd episode, the dilly dallying and the messing around of that science-club meganekko was just irritating. Are they trying to lengthen the episode? If they are trying to save money with that, I don't think they are doing a very good job at it.

... And whats up with the inconsistent art? I remember Kanade being a lot better looking than this. Maybe they are trying to... save money on artists?

To think I was waiting so anxiously to see what would happen after Misao got pseudo-killed.

Oh well, at least they compensated with some B grade fanservice

And a loli. Yes. Lolis are always good. Perverted lolis are even better.

Also, it seems Seven Arcs is trying to imitate Shaft's style of suddenly random poses and slight fancervice thrown in with a slightly artistic looking touch thrown in

I also wonder what it is they were looking at. 4chan, help me please.

Misao is the greatest thing to happen to this series.

And fanservice is fine too.

Its kinda hard to decide now if this would be a Mahou Shoujo/Mecha/Harem anime. It seems to be a complete hybrid. We may be seeing a lot of these sorts of anime lately.

One thing I can say is, the action scenes are just too short and unexciting. Kurogane basically pwns Hisui and then almost kills its ghost-pilot until the wimpy main character decides that no-one has to die or something idealistic like that. Precisely the stuff that put me off Gundam Seed Destiny.

Lets just hope future episodes aren't as empty as this one.