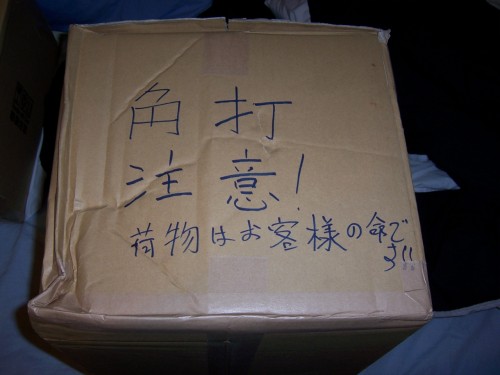 If anyone of you works for the post office, do not let me catch you dropping boxes on their corners. I can assure you you will face the same fate as non-believers of Mio-sama. There will be a bon fire which you will be invited to, and your genitals will be crushed.

When I saw this corner at first, I panicked, and went into denial for a while and then started raging all over the net. And I have a good reason to. This box contains the Haruhi Gekisou ver. figure. All of you know what that's like.

So I hurriedly opened the box... and found that it was the Yami figure that was actually on that side of the corner. I breathed a heavy sigh of relief, but still I wanted to know if the box was affected.

Turns out it wasn't affected as badly as I thought, the paper slid the force to the side and got torn in the process. What an ingenious way of protecting boxes.

This means that the dent actually did come in, but not enough to deform the box, though it was still pretty mean looking from the inside. Now that's what I call giri giri safe.

However, a look at this and all my anger and anxiety faded away. So for those of you wondering what's in the box...

This was in the box. Well, not box, but boxes. Yes. I seem to have been fed some of these. One of them is not mine. Can you guess which?

Haruhi from Suzumiya Haruhi no Gekisou.

Louise (<3) from Zero no Tsukaima. Now Kagamine Rin won't feel so lonely in my office anymore.

Ryomou from Ikkitousen. I didn't want to get this at first, but thanks to Haruhi's dreams it ended up in the box. I think she had Mikuru in mind. (maid uniform)

Unchou frmo Ikkitousen. (I have no idea why this one came, I think Haruhi was watching Ikkitousen, but I don't understand how she would have liked it)

Cheerleader Haruhi (I had to get another uniform for Nagato)

And Makina from Shikabane Hime Aka.

Since there are so many figures, and I have run out of space to put them, I guess they will stay as they are in the box for a while, until I decide to use them for health purposes. until I get a new house, or new shelf.