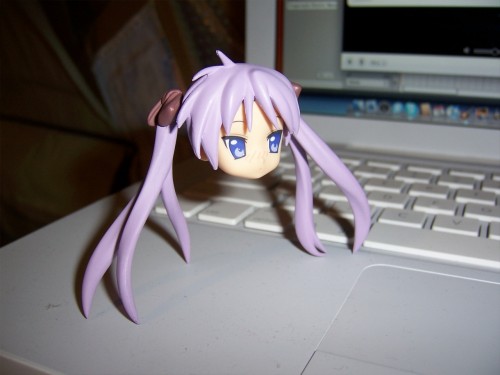 Some of you who hang out with me would know that I broke my Kagamin figma's neck on Tanabata. Which is why I used Kagamiku in the picture instead. It was no accident. But the Kagamin figma's neck breaking was. It was a very bad omen for me. I had a bad time at work and nearly got into an accident. All is fine now however, as I faced my fears and set out to repair my beloved figma.

In an effort to take some pictures of Kagamin on high places, I forgot just how fragile figmas were. When Kagamin fell down and her head rolled away from her body, I knew it was something horribly bad. Thanks to that I was in denial for almost the entire month of July.

Some friends tried to console me and tell me it was possible to repair her with a drill or screws to pull out the neck bit. In my despair I shunned all advice and retreated into isolation for some time.

It turned out however, I had a power drill lying around somewhere so I decided to drill the bit of Kagamin's neck that was stuck in her uh... throat first. Because without a hole, it would be impossible for the head to penetrate it. I also had extra figmas whose heads aren't useful. I decided that perhaps it was time to face my fears and work with it.

The operation took a while and I was clumsy at first. But the throat survived the drill. I couldn't take pictures while I was drilling because I was in tears and crying hoping for the best as I tried to repair her. However I finally managed to drill Kagamin and remove what was left of the neck so a new connector could go in.

Using the head of a plier I managed to pull the broken neck out of the back of Kagamin's head. I had to do this carefully lest I would damage her brain and Kagami would lose all memory of me.

Now, Kagamin finally has a new lease on life thanks to the modern plier and power tool technologies. Also, I must thank tragicomedy for helping me through all this. The pain was made much easier with supportive friends around.

After reconnecting her head, I finally allowed Tsukasa to see her sister again.

She was overjoyed, despite the gruesome presence of Kagamin's old neck and its remnants still stuck to the tip of the drill bit.

Alas, the two sisters are together again. Kagamin seems slightly shorter because she missed a month of important growing during the time she was "dead" with a broken neck. Tsukasa looks like the older sister now but still calls Kagamin onee-chan.