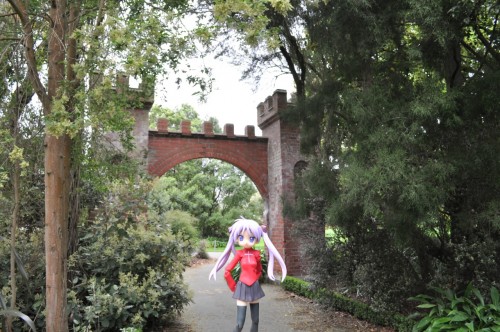 It was a cloudy and gloomy day today so me and Kagami decided to brighten it up with a little visit to the flower garden. Since it was all cloudy today and you couldn't see the sun, it was pretty cold too. Mona Vale is an awesome little flower garden in the middle of a suburb full of pretty flora. Since not all flowers bloom at the same time, we only got to see a small bunch of early bloomers which came later than the sakura. 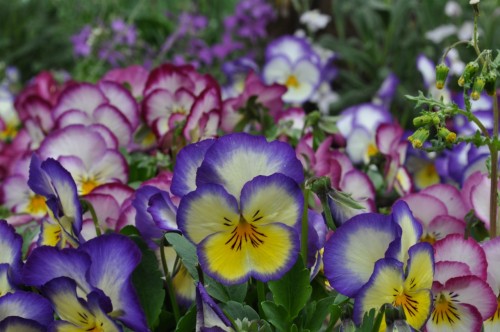 These flowers lined most of the roadside and came in like, 3 varieties, Violet, Pink and Yellow. I forgot what they were called. I should've photographed the name signs.

Kagami seems to have taken a liking to the pink ones. Since it was a lazy sunday afternoon with temperatures of less than 10 degrees, there was practically no one around, leaving Kagami to freely trounce about merrily.

There was a line of tulips in the garden too, and we decided to photograph those. Interestingly enough, the camera actually made the tulips look much better than what they actually looked like in real life. I guess this is what you call photogenic?

Here's an early one out. Most of its buddy buds haven't bloomed yet. 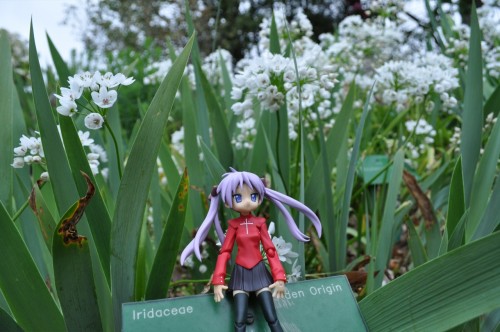 Kagami sitting in front of a bunch of Irises. Well, at least thats what they are called based on the sign. 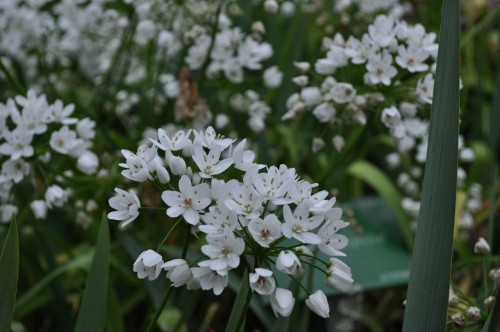 Nice white little things that grow in bunches. Might make for some useful filler flowers in a bouqet.

I ROFL'ed when I saw this. I didn't know the word actually came from the name of a tree. I mean, I can guess where the people who adopted the word from a Beech tree were coming from but...

There were people throwing bread to the ducks, so Kagami wanted to watch them. The ducks migrate to Alaska every end of summer in March and come back in mid-September when the weather gets warmer. Environmentalists are saying that heavy development in Asian countries are destroying the habitats of the migrating ducks along their migration route. The level of impact on the ducks however, isn't exactly known yet.

Belldandy! No honestly, I don't know what these flowers are called either. There weren't any name signes near these.

It was strange how only a very small subset of the flowers were open today. The rose garden is still completely brown. i.e. no roses yet. Will visit again when they bloom.

"Where do you want to go now?" 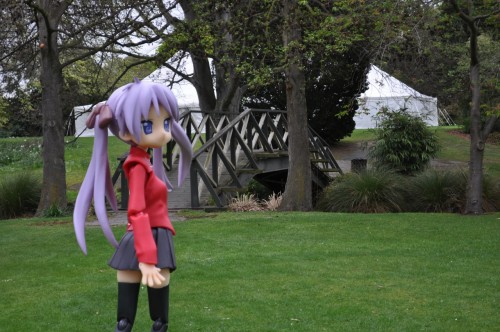 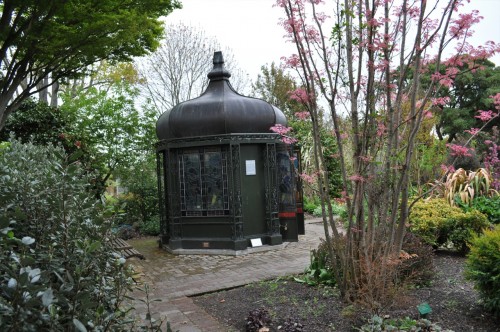 There was a little gazebo built in the middle of the garden for the purposes of preserving some stained glass. Here's an image of the sign on the outside of it.

Interesting eh? But I can so see why they wanted to go through all that trouble.

The insides are really pretty.

I wasn't much of a florist so I didn't know any of the flowers that were blooming. But we strolled around to look at them anyway.

And to enjoy the nice westernesqe sceneries. Its cool to see all these little elaborately styled benches dotting the riverside in the park.

We spotted some really interesting flowers...

... and Busy Bob the Bumblebee. 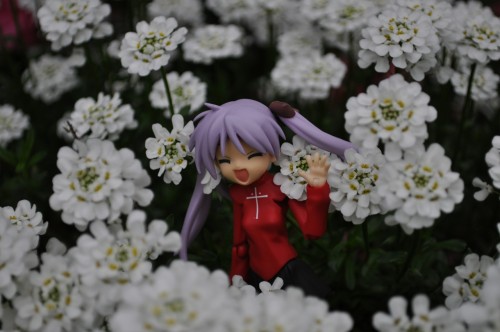 While Kagami just frolicked in the flower cushions.

Well I guess that certainly brightened her day. She asked me, what did Rosemary say to the herb garden?

After a few minutes of vainly trying and coming up with lame answers, she finally gave me the look and told me:

What we didn't realize was that we spent almost 2 hours in the flower garden. I guess there really were a lot of flowers to see! When we got home Kagami was visibly tired, so she went off to cuddle with Mashimaro.