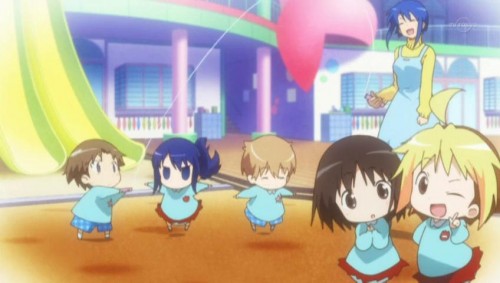 There must be some very good reasons why Hanamaru Youchien is suddenly my favorite show this season. I don't know them. But when you get a girl produced by a teenage pregnancy, and the girl is as looney as her mom, I think you'd end up with something so unusual its actually worth watching.

Okay I admit, the ED was the icing on the top of the cake that I wouldn't have bought had it lacked icing. But I cannot help but wonder if we really exhibited the kind of intelligence that Anzu and friends exhibit, when we were in Kindergarten. I think we were pretty dumb at the time.

But it wouldv'e be awesome if we actually pulled stunts like impersonating a teacher to get his attention and stuff in Kindi and not get punished for it. Of course, epic kindergartens only exist in anime. Still, I would never have thought you could make kindergarten so epic. But its still great to hope real life imitates anime.

Ahhh I also want a daughter who can cast open heart...... xD