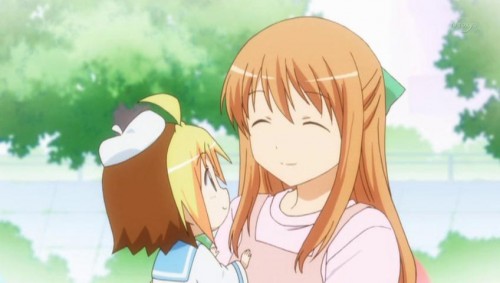 "Okay, so Tsuchida-sensei is like, dense and all, but I don't see why no matter how often I hint him, he never makes his move. Are boys these days liek, allergic to girls or something?"

"We sat on a train for like so many hours I thought my butt was starting to become part of the chair. Great thing I was wearing a skirt, or I would've gotten some god awful rashes... Man, how does Sakura get away with wearing jeans all the time anyway?!

We were so bored Sakura made some jokes about everyone being Tsuchida's bride and all, so I thought I'd tip him off again. But noo, he just goes all vomity and stuff. Am I really THAT ugly? I mean, I'm not the cutest girl around but... seriously! Hey boy, we're both liek 30 years old now, NO ONE is chasing me and I'm in a hurry to marry.

... and I REALLY need to find a better brand of tampons. "

"But even though he seemed like he was so unwilling to be with me he was still being so nice. Whats up with that anyway!? Actually I kinda hoped that he did offer to carry my suitcase anyway. Lucky I didn't have to carry all that stuff up that mountain I didn't know about. What are they, hermits living on a mountain?"

"His mother though, was faaaar more charming, and that's great. I was pretty worried that if I hadn't gone on this trip I wouldn't know what she'd be like. THANK YOU SAKURA. Gosh this is great. If we work together I can keep a nice close eye on him, and his mother is teh pwn! I really gotta make this work now. I just had to do like I do it in the mirror always and say hi so nicely I get these flowers growing behind me and SCORE!"

"Okay so I tried this awesome thing I read in 'How To Trap Boys' in this awesome book by this lady called Lim Feng Shui, and tried to act as if we wanted to tell his mom something important. But Tsuchida is crap. His mother misunderstood but he cleared it up immediately. I mean, WTH!? I was already like, smiling and nodding away and stuff, whats up with you?! We couldv'e been like tied up there and THEN! I really gotta go get some image advice. I must ACTUALLY look so bad even a loser like him is running"

"I really get the feeling that his brocon sister's got something to do with it. Oh man, I hope she doesn't give me too much trouble... Like, she's one huge attention whore. Need to get her off his back so I can snap him up."

"Okay so the idiot finally tried to make his move, but that god annoying Anzu is as crazy as her mom, jumping on someone's hand in midair. There goes my chance again. Seriously, trying to get a boy to pull you in is freakin hard work."

"Whoa its so hot tonight. I think I pulled the sash too tight, I'm getting slightly dizzy and all now. Maybe its time for bed. Gosh I wonder if he'll sneak in tonight and jump on me so I can tie him down on a wedlock...? ... Pfff fat chance."