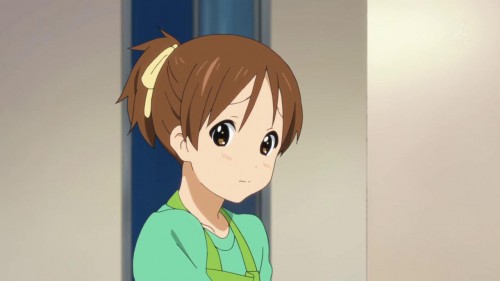 Most of the time I talk about K-ON I usually talk about Azusa, and of course, not a lot of people mention anything about Ui either. While she is a side character in the series, I think she deserves at least a little mention in a post on its own, despite the precious little that we know about her from the infinitesimal amount of screen time that she more than deserves.

What's so perfect about her? Well, everything. She cooks and cleans and picks up after her sister and takes extremely good care of her, and does not even complain at all, whereas most siblings are usually so chronically tired of each other, simply seeing each other everyday sometimes makes them irritated.

I must also mention that which has already been mentioned by Sawa-chan-sensei. Her body is much shapelier and better endowed than her big sister's. Something that most men would take precious note of.

On the less carnal side, she is also a very very good cook and treats everyone to extravagant parties. She is kind and very tolerant, from the way she handles a grumpy Azusa in her house during sleepovers.

She is also extremely lively and bright, and always acts like she has all the spirit in the world. Her learning skills are incredible too, learning how to play the guitar well enough to trick the band members and causing them to realize that it's not Yui because the playing was just perfect.

Because the playing was just perfect.

Despite getting very little screentime, she is one of the most notable characters in K-ON and definitely one with a lot of impact. And definitely a sister that everyone wants to have.

One thing however, that K-ON makes slight hint of but does not go far with, is her very subtle yet very obvious infatuation with her sister.