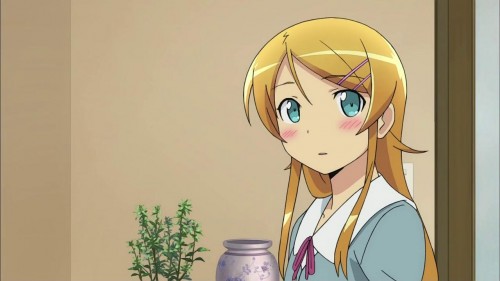 I feel you Kyousuke. Being so close to family is sometimes strange and unusual even though everyone lives together. This show addresses some really important aspects of brotherhood and closeness, and the complicated feelings arising from when a family member decides to leave to a faraway land for a long time.

I find it cute how Kirino goes all nice to Kyousuke when she's about to leave for America. Even though the little encounter in her bedroom was short and lame, it actually struck me that Kirino might not see her big brother for a long time after this.

So Kirino's awkwardness isn't unjustified. It's pretty sad to leave home for a long time, and the time when the feeling is strongest is when you are just about to leave.

That's probably what I love most about this show. It deals with all the funny things siblings go through when they live together as a family, and it does it in such a way the audience actually feels an impact.

Side note, Kuroneko has gained over9000 points with me. I'll need to make a post in her honor later on.

Anyway, enough sniffing-over-almost-sad-story for now. One still wonders if Kirino's obsession is really because of a certain very wrong taboo of general society.

There's no way Kirino could be that cute right?

You're wrong. Yes way. But too bad Kyousuke can't feel that way.