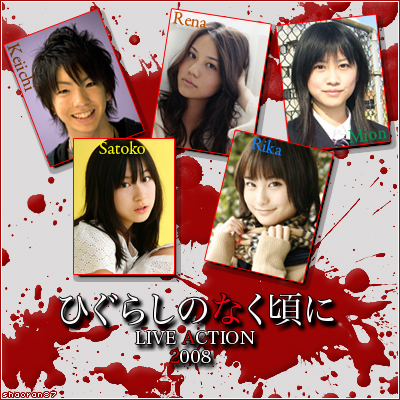 Lately there has been a trend of Japanese studios turning anime into Live-action shows. Are people finally deciding to come back to earth and to real life? Is this the death of anime as we know it? Or is it the beginning of a large series of very very sucky shows that plagued hollywood before it rose to becoming the most effective propaganda center of all time.

While Japan prepares to air the show on their IMAX screens, you can watch the trailer here 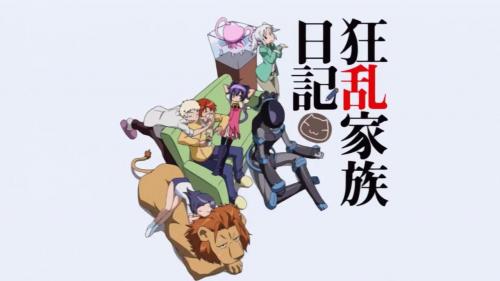 Looks like another crazy anime has just come out. Kyouran Kazoku Nikki means the Diaries of the Mad Family, and the show has really lived up to its name since the first episode. It all starts off with this catgirl running around town in an Oliver Twist-esqe rampage of food collection, but starts to get random once this girl reveals who she really is. She meets Ouka Midarezaki (which contains the character 乱, which means mayhem or chaos) who appears to be a member of some random shadowy organization involved with finding stuff like UFOs or supernatural stuffs (Haruhi's dream). It turns out that a family has been organized to track down the child of a once great monster to kill it, and Ouka is bound to be the man of the house. ** there may be spoilers in this post **

Apparently a new phenomenon is rocking the interweb. Some Swedish techno song has just infiltrated the hearts and minds of all those creative otaku out there and directed them into producing music videos depicting anime characters in compromising positions holding their hands up like cats ears and shaking their butt like never before. If you don't know what I mean, check out the video up there (which I think is the best of all the vids). And if you really need more examples, I've collected a handful of youtube vids for you to further your education. (Small pipes beware)

Only a few weeks ago it was supposed to be the last episode...

After missing the last 5 minutes of the last episode as a result of a big big ***********************, I was shocked to see this. I can't believe I missed the most important part!!! Argh! As if not having enough time to troll around and look out for the spring season's new anime is enough, I have to suffer the torment of missing something in the middle! This is unacceptable! - is what I thought until I was overcome by Nagisa's extreme dereness that gave me a moe explosion. I'm not one to simply go boom from dereness but Nagisa has always been very popular with me.

Also from this episode, I never knew how strong Mei was. I must admit, if the bread tasted like shattered glass, I would never have the strength to go further and flatter the maker on how good it is with a straight face. This must be one of those qualities you lose when you grow up. I also never knew how good she was at doing business. By exploiting the fact that Nagisa is cute... she took this:

A true creator indeed. In other news, I have also learned from this anime that when your imagination runs wild, try and hit the brakes hard, because the next two pictures should be taken with a bit of salt. I mean, I never knew Okazaki had such a vivid imagination... It actually felt like it was right... but I really find that disgusting. Like, worse than Akiko jam and Akio bread.

The picture above was the gheyest scene ever. Like, literally. I didn't want to take the picture after this one because it was disgusting beyond words. I mean, I cannot imagine anyone wearing boxers with a big heart on them. And I don't even want to imagine two shops selling a pair of them. *goes off to puke. Ugh... Kyoani, what have you done? Those were the most rotten scenes ever! >_<" It must be punishment for not following the series faithfully enough. Though, this episode has one saving grace: 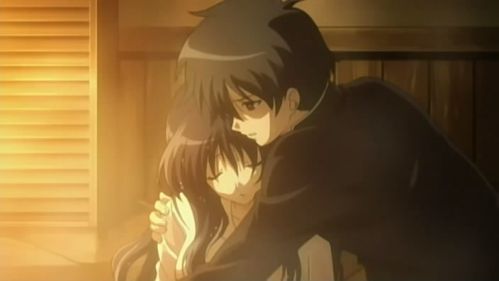 Romance is often used to back a story up much like any other plot device. Making characters unsure and unaware of their relationship makes it all the more true to life. This is one of my favorite scenes from Myself;yourself that really put me on the edge of my chair. Well, not quite, but it did make the anime all the more exciting. I mean every show has got to have some of this stuff right? 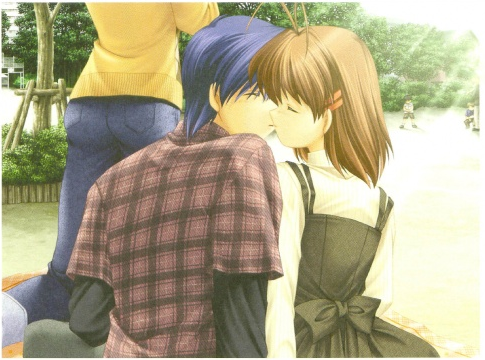 It seems that whenever a character in an anime gets featured in a romantic relationship, no matter how unpopular they would be, their ratings naturally shoot up. A prime example of this is Nagisa from CLANNAD who simply isn't the most popular girl in the anime and might as well become another girl-who-sits-in-the-resource-room if not for her redeeming relationship with Okazaki. This goes to show that love is indeed a strong basis for a plot, and the strange mechanics of the human mind simply makes those who are in love popular. 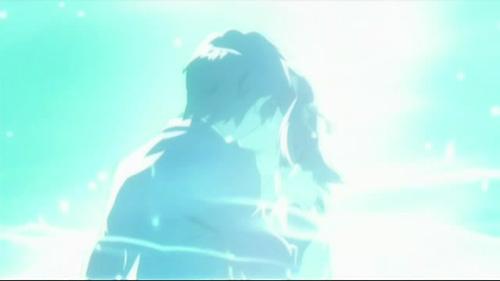 Of course, sometimes love is also used as a device to smash the story into the face of the audience. Shock therapy is conveyed via love in Suzumiya Haruhi no Yuuutsu's last few scenes where Kyon kisses Haruhi. Despite not being quite the classic example of romantic indifference in anime, it certainly brings to life the characters by reminding people of how love in real life constantly exists in this form. Of course, the climax, long awaited for by all those who anticipate it, make the story all the more rewarding if it happens just at the end. 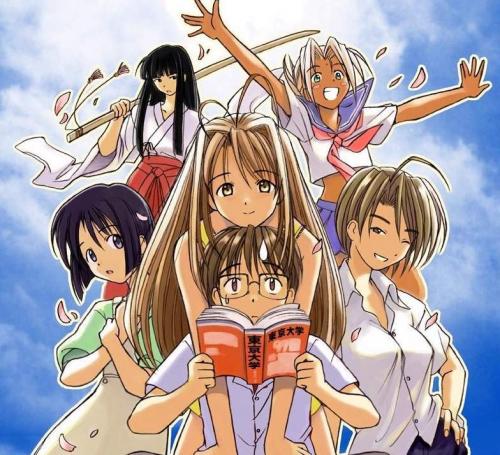 Love Hina used the same technique by constantly delaying the final makeout scene to the very last episode of the Love Hina Again OVA. The moment it happened, I could've sworn I went "AWWWWWWW" in my head.

Fear me and my random pictures 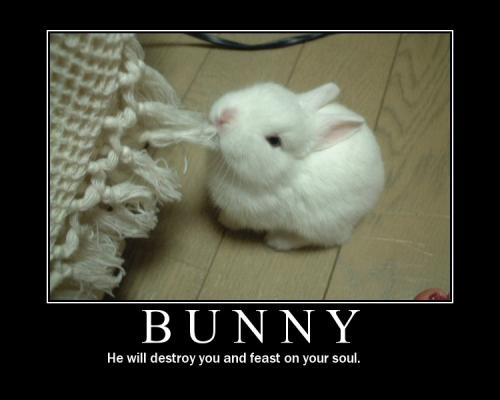 High standards of Moeness determine the success of modern anime 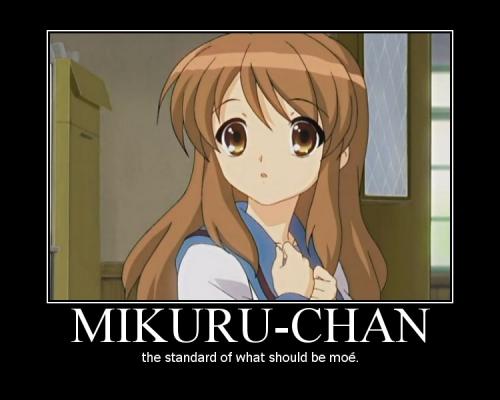 We so love Mikuru don't we? I think she's overrated. *runs from tomatoes and onions thrown at stage 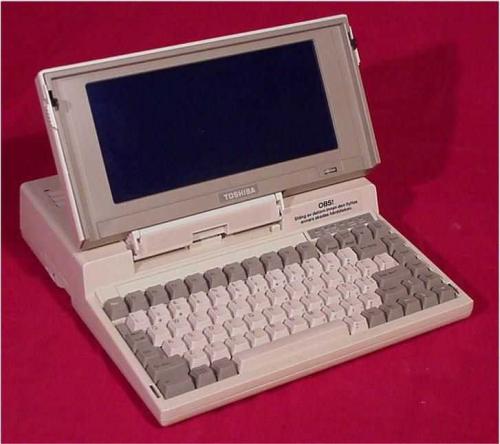 I remembered when LCD color monitors started to be sold for desktop computers and not just for notebook computers, which were beginning to be much more mobile as LCDs were being used as their displays. I was born into an era where computing was already (inevitably) blazing down the path of dominance of everyone's lives. Despite LCDs still being far inferior to CRTs (yuck), and their refresh rates hideously slow, it did not take long for LCDs to improve from that monochrome display used by the the computer seen above (which was my first notebook computer btw), into low refresh rate low brightness versions of the wonderful displays we know today. 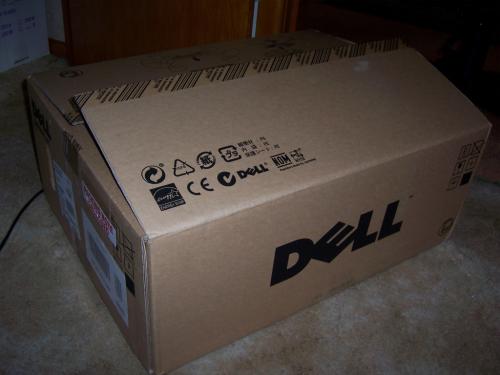 Fast forward to one week ago, Dell sent in one of their almost-phased out version of their 24" desktop LCDs, the 2407WFP. Despite being sold at clearance prices now, this panel still trumps many many other panels in terms of performance (6ms refresh), image quality (1:1000 contrast WOOT) and vividness (5% brightness lights the room up as well as the fluorescent lamp on the ceiling). The box came in such a wonderful, such conspicuous glamor that everyone in the house couldn't help but ask what it was (-_-").

We love fan subbers, so yeah... 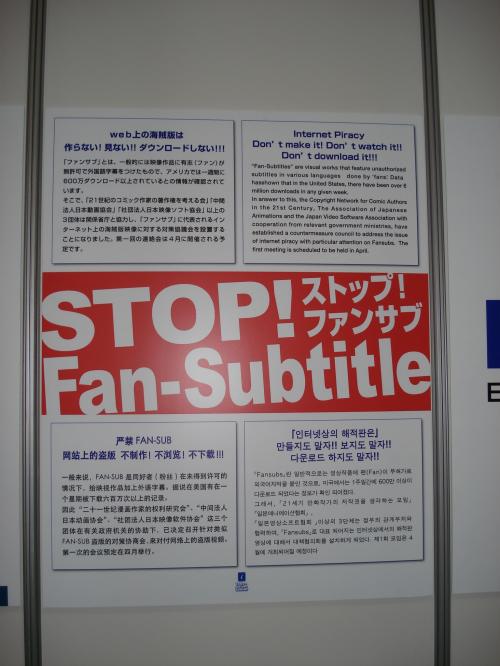 Apparently, as the picture says, the guys are finally gonna get off their lazy ass and kick some serious fansub ass in April (lol). Well, talk about irony. The very people who made anime so wildly popular suddenly become blamed for the losses incurred by companies who never bothered to sell their content to those who wished to buy it. God I wonder what's going on with this world. Are they making anime so they can get money from filing suits against fansubbers?! No way in hell would the once-was-fledgling industry have become so lucrative without the massive free publicity brought in by these people. Even funnier, their argument of not making much from it holds no substance at all. If it wasn't lucrative, why would they be doing it anyway? And putting so much effort into doing it? The truth is out there, and has always been out there. Everyone knows how much money the industry is trying to squeeze from every last tsundere available to them, and even if people do things that are weird sometimes, face it, this world still runs on logic. 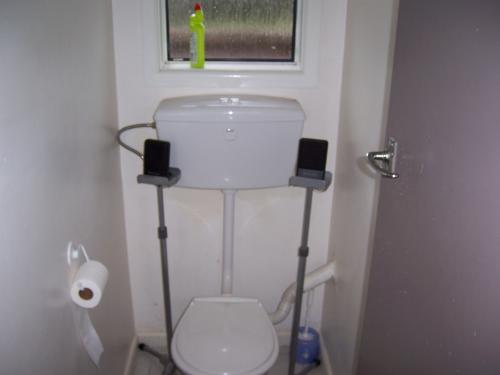 On a lighter note, I have finally recovered from my internet withdrawal symptoms. Here's a big Thank You to all those who supported me in my darkest hours when broadband was unavailable. So, so long and thanks for the fish! Oh and look out for the new audoilet concept, the next big thing in the audiophile world.

Of course, a few days ago a very delicious box was sitting outside my home, playing the guitar and singing "Where have all the flowers gone" while ignoring me as I walked down the driveway. This is how extensions to the e-penis always are. They hate you, then they become a part of you. Here's a toast to the newest member of my Panel on the Table. I'll be sure to write a blog post about that soon. Meanwhile, an acute wave of fatigue just swept past me, legacy of the insomnia that has been part of my life to fill in the void left by what was once the Internet. I must now slowly recover from it through my extended beauty sleep program, and 2 doses of widescreen CLANNAD and Shakugan no Shana Second. Will report my condition later. PIECE OUT