I'm not much for shoujo anime but this one caught by eye. (Ok fine. I'm bored because I'm waiting for Macross Frontier 8 to come out.) Itazura na Kiss is a charming little story about a girl who seems to be subject to a divine prank where she just gets drowned in rivers of misfortune. Here's the story in a nutshell: 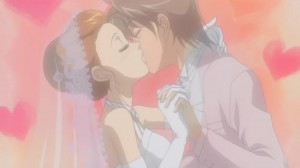 So this girl, Kotoko falls in love with the top student of the school for 2 years and dreams about getting married to him so she becomes determined and attempts to confess to this guy and then dies.

No just kidding, she actually gets rejected by this guy who's so full of himself he can't even store it in his house and brings it to school. Later, after school he sees her and tells her he hates girls that are not smart. I know right?

A family friend then tells her and her father to go to his house to live while they are homeless. So they went over and guess who's house it is. Go ahead, guess.

Yes, I know. But if I was in her shoes and was a girl and was in love with the bastard I'd do the same thing. But that's what I like about the anime. In any case, this guy is weird. Being able to memorize stuff on first sight is something too uncanny to be called human.

And wtf is he eating anyway!? Nattou and rice is like ice cream and chilli sauce... No way...