10 Reasons why KKN5 is awesome 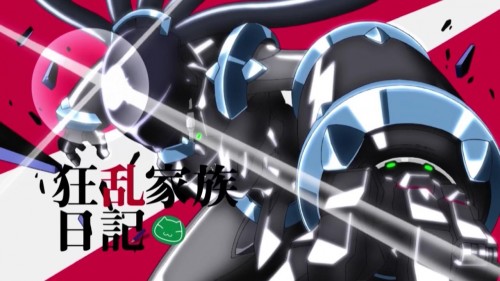 Today's another batshit insane trip to the beach, um I mean... Honeymoon. Yes. We must listen to Kyouka-sama and say its a honeymoon. This episode is by far the best one so far and ima tell you why. Most of the other episodes have been absolute pure intrinsic virgin randomness. But today, as Simon would put it, is like "coming out of karaoke hell, into a breath of fresh air". Don't get me wrong, the randomness hasn't been toned down much, but at least this time the producers gave us something to look forward to. I'm assuming you guys have already watched this so its gonna be chock full of spoilers mind you.

Why this episode is awesome Reason 1:

Waking up to a runway in front of your home is win. Finding yourself having to go to the beach early in the morning via a plane parked in front of your house is awesome, the cost of building a runway in one night is $10000000000. Knowing your wife did it, priceless. Kyouka-sama seems to be capable of anything under the sun, if I didn't know better I think it would have taken longer for the tarmac to dry in the time the runway was completed. I want to buy a one way ticket to the 2-D world NAO.

Why this episode is awesome Reason 2:

Finally, all the children in a nice cute scene. I looove seeing Hyouka in his santa hat. That's the cutest biological weapon I would see in years. Teika's messy hair just amplifies his GARness (its hard for lions not to be GAR) and Yuuka is just so friggin irresistable its hard not to hug someone like that in 3-D. Chika is moving up my moe charts and Ginka is giving me lots of trouble with his gay attitude. Man, he is so gay he makes Elton John look straight.

Why this episode is awesome Reason 3: 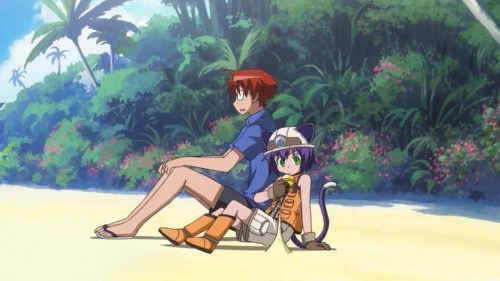 Its hard to believe these two are husband and wife. Just trying to imagine them together makes my genius head crack up like Beichuan. This is the most natural scene ever that I've seen these two in. Most of the time they would be in situations which the US Government would censor and the Al-Qaeda will use as teaching material. I wonder what the producers will put them through next. But I think that's too late. The anime has become so random its hard to have any touching or romantic moments in the story without making it batshit awkward.

Though, more of this stuff would be nice. Maybe in space?

Why this episode is awesome Reason 4: 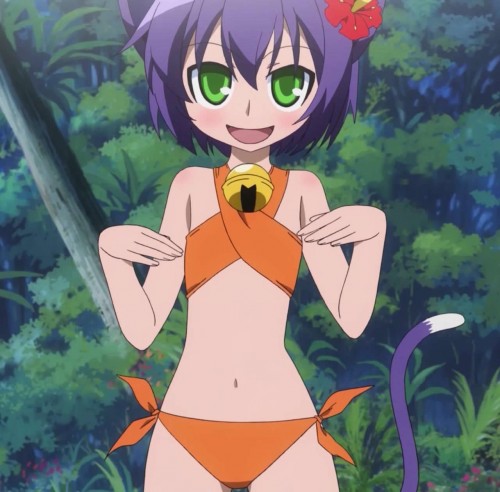 Need I say more? The bell apparently is a naturally-grown biological part of Kyouka-sama's body. Ouka now has another item to play with. :x I wouldn't go about flaunting my personal interests around but Kyouka-sama is a big exception to almost anything. So I must say "LOLIS FTW".

Why this episode is awesome Reason 5:

In this episode, we get to see lots of examples of incestial and pedophillial possibilities brotherly love and happy family life. School swimsuits like those never drew me crazy since I'm not the kind with special needs. I'm not sure why those swimsuits have a structure like that either. There must be a reason why the suit is made up of two pieces of cloth attached into one. Maybe some revolutionary loli decided to proclaim that it felt good and the government mysteriously passed the bill no one understood and no one cared except those silently watching TV behind the scenes, watching the world fall into place for the ultimate attack of the otakus.

Why this episode is awesome Reason 6: 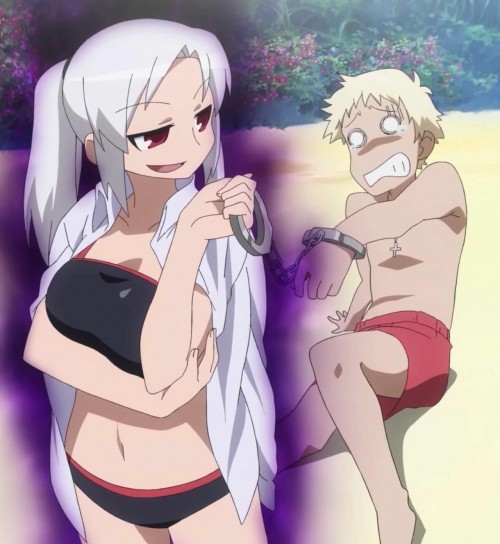 Why this episode is awesome Reason 7:

DERE KYOUKA. Finally! Perma-nekomimi is in Dere mode! It seems embedded into the internal firmware of every single anime girl a program that kicks off a dere mode whenever they hear words like "suki" or "aishiteru" or anything else related to the last words a man says before he completely loses his freedom. This is the pinnacle of Kyouka-sama's cuteness, if there ever is any, and please keep praying to kyouka sama so we get more of this and more...

Why this episode is awesome Reason 8:

While flying robots alone don't make Macross Frontier awesome, they are certainly the oil used to cook up an awesome anime. This scene alone qualifies to become a poster of Kyouran Kazoku Nikki awesomeness with Hyouka carrying the damsel in distress Yuuka to safety from the Flight 00 tragedy. Flying robots continue to capture my imagination no matter what the situation. Whether its a rescue from being sucked into outer space, or a reckless mother causing a commercial airliner to crash into a sea and strand everyone at a not-quite deserted island, everything needs flying robots.

Why this episode is awesome Reason 9: 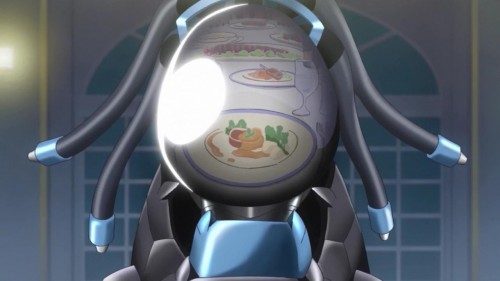 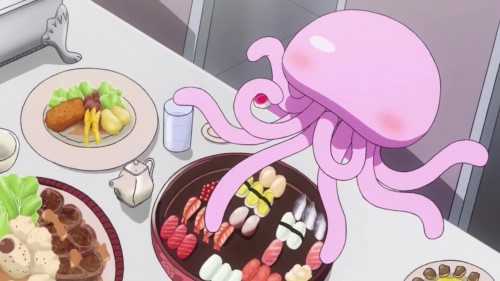 Mmm... Sushi... Dinnertime! Dinner is where everyone's true self comes out. Its amazing how quickly everyone got used to each other in this family. I mean, if I was ever adopted into a family full of strangers all of a sudden, it would be sooo difficult for me to adapt. But maybe that's just because I have a kickass family and an awesome life. I really feel for Hyouka though. I'm sure he would love to be able to eat that stuff. Or maybe he can? I'm not sure. I think there was a part where he actually ate, but then again, nah. His head is really shiny though. Really reminds me of those pachinko machines.

Why this episode is awesome Reason 10:

Kyouka-sama's pranks are just lame, awkward and awfully silly. But they are funny, and that alone earns points with me. There are like at least 5 people I would love to do what Kyouka-sama did to, and I would love to write pierre on them too, though not for the same reasons.

I would go on further but the next part was just a random combination of randomness and awkward emotion where Yuuka gets kidnapped into some deranged doctor's lair by retard albino gorillas, and I'm really tired now, since I spent all day banging at the keyboard coding all day, typing seems to be unusually difficult tonight.

Its interesting to note that Gekka actually sounds like he/she is talking. Though I love Gekka's electric tentacle technique. And Gekka's handwriting is impeccable. I have no idea where he/she learned it.

OMFG Kyouka is watching Zero no Tsukaima 7! OMGOMGOMG. Is JC Staff teasing us or something?!