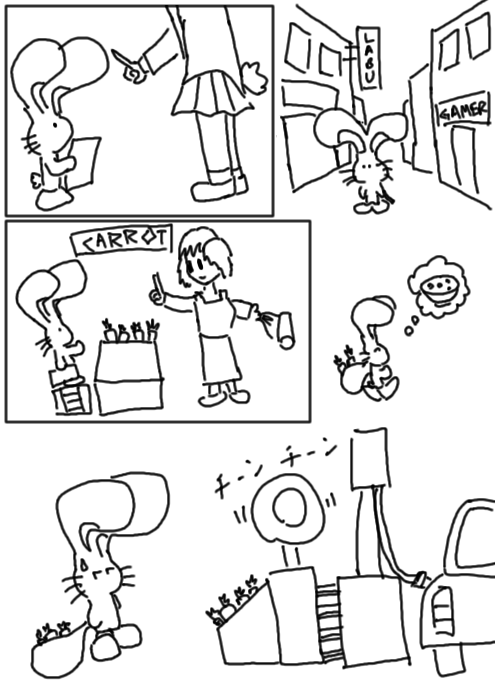 Recently there has been a rising trend in fuel prices as those bastards selling oil continue to jack up prices to fill up their own pockets and leave billions of people with less and less money to buy fuel with. With these trends comes the rise of food prices too. But the rise in food prices aren't because of the increased transportation fees associated with fuel. There are now more people than ever but still roughly the same number of farms around the world that actually feed humans. The result? Not as many carrots as we once had.

You might think that with so much land on earth, how can there not be enough? Well, most of the farms are used to feed livestock that grows our cattle, sheep and chicken that supply our neverending appetite for McDonalds, steak and KFC. In a way they are feeding us, in a way they aren't. But that's not the biggest reason. The reason food is starting to get scarce is, in an effort to make more money out of their farms, farmers are now moving out to planting sugar to produce alcohol. For what? You guessed it, fuel. With fuel prices rising like temperatures inside a tsundere on a bad day, farmers are finding it more profitable to just plant oil instead of food.The direct consequence: less food for more people.

I was a bit outraged when I read this in the news, and a quick google will lead you to lots of places talking about farmers moving from food to fuel, but very few that actually condemn them, playing down how bad this situation is becoming. Of course, this is the Malthusan Catastrophe in the making. It was and still is very obvious that we are headed the way of having too many people and not enough food in this world. Yet, no one really says anything about it. People just shrug it off and change the subject, or quote advancements in agricultural and genetic technology.

Farms are currently harvested 4 times a year in some places and what, are they gonna genetically engineer people that eat less? The r ecent summit by world leaders with oil producing countries just show that people simply aren't or just not wanting to pay attention to people going hungry. The food summit at Rome just threw blame at other people. Are people too afraid to face a fact that is currently slapped in their faces? Or are humans just programmed to create their own doom?

Maybe someday gems won't be the only things that will be measured in carats(carrots). 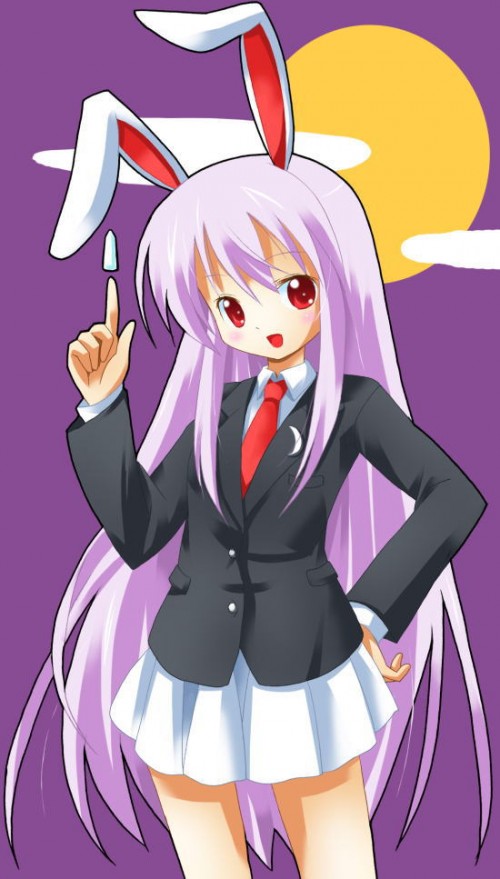 In response to popular requests for bunny pics. Yes I also do think that for a bunny's website, this site lacks bunnies. Thus, I shall kickstart it with these two new awesome pics of my favorite bunny! Reisen Udongein Inaba!

Click jump to see a pic that is less SFW 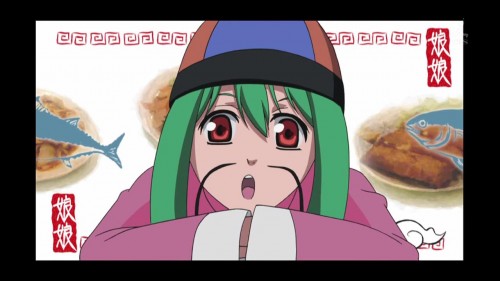 This episode is a little less exciting than the rest. Though Ranka being an old man is a twist of things. This episode is basically a fanservice/filler episode with an unusual amount of swimsuit and lingerie scenes crammed wherever the story permits. This episode basically celebrates Ranka's success as an idol and starts doing lots of publicity jobs like photoshoots and doing performances towards her first live performance at the dragon stadium. 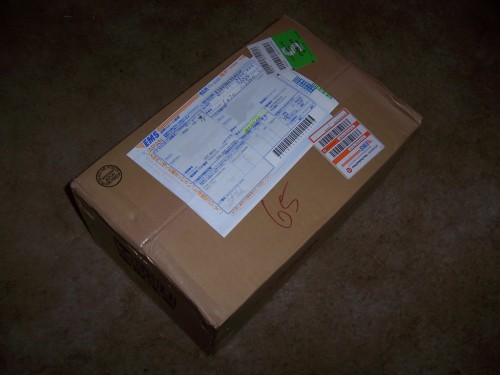 I've recently acquired some figmas, a Haruhi, Nagato and Nanoha. All made by my favorite toy manufacturer, Max Factory. I learned lots of things about figmas and how they were made to be photogenic and not for being stared at while you're fapping under your trousers. More pictures after the jump. Was busy today so I didn't manage to give the figures a proper unpacking ceremony and welcome them properly into the family by giving them numerous photography shots worthy of a gravure idol. Will post more soon. 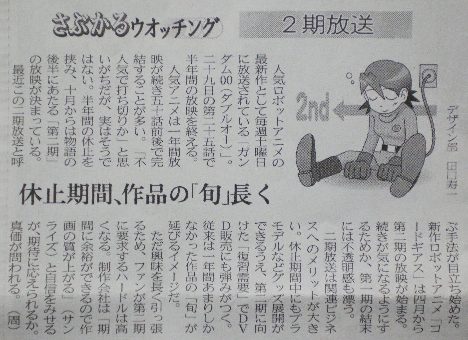 If you can read Japanese, it seems the second season of Gundam 00 is coming out this October, which isn't very far away at all. They say that the second half of the story will be played out starting from October as Season 2 of Gundam 00

Looks like there is some good stuff in the line-up this year. Although KyoAni has been rather quiet about it, word has leaked out that Haruhi Season 2 will be coming out this Autumn, and CLANNAD 2 doesn't seem too far away either, but there seems to be some news that has caught my eye on dengeki called Toradora. It is a high school love comedy about some ordinary guy and the top-ranking Tiger of the school, Aisaka Taiga. That looks like something that could be pretty fun to watch. *Jumps in anticipation. Meanwhile, look out for Toki's project on Zero no Tsukaima 3 that's gonna start this July 7th!

Our cute chibi manifestation of ultra-tsundere moeness is back to haunt away the evil tomogaras. I must admit, Shakugan no Shanatan, although a short and random series of spinoffs, is a stroke of genius. God I just love it when Kazumi goes into WTF mode. Genius. Absolute genius. Ok. fine. I'm late. But HEY, at least somebody's got a life to speak of. 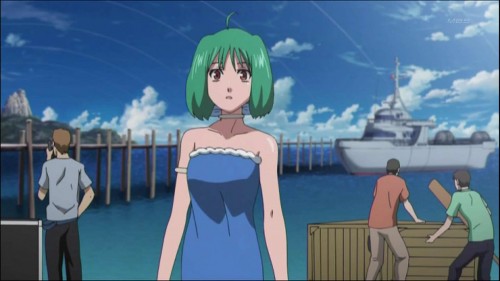 Episode 10 continues to remind us why Macross Frontier is so awesome. In this episode, we see a Macross Zero movie in the making on one of Macross Frontier's ships. I start to wonder how ironic making a movie of your own universe is, but I guess the guys in the macross universe could call it "a true story". This episode is packed with Ranka vs Sheryl antics really pulls up the tension between the two, as well as bringing out Alto's acting past.
Continue reading » 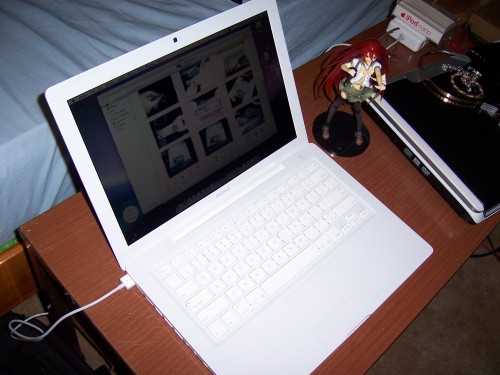 Yes. I succumbed to the dark side, and I got myself a Mac. To be honest, I am quite pleased with it. There have been a few issues with it though, such as the absence of a decent MSN client (that has webcamming abilities) and a decent MKV decoder. I know about Perian but it does not decode my Macross Frontier episodes (1280x720) fast enough, and Macross Frontier cannot be watched at 5 fps, though it does pr0n Kanokon AVIs pretty decently.

PC feels awfully insecure now that the mac is sitting next to it, taking all the table space next to it, causing it to be THE place where I now throw all my stuff, including my girlfriend's stuff when she comes around. I should make a Mac PC video sometime.

I must say something about the speech recognition thing built into OS X though. Although cool, and free, the speech recognition kinda sucks at decoding my Malaysian accent. I always have to act out my quasi-american accent to be able to get it to work, but even so it works like only 10% of the time. My advice to Steve: MAKE IT BETTER SO I CAN TELL IT TO BUGGER OFF WITHOUT TOUCHING IT. Why would I not want to touch it? Well just look at it! It gets dirty every for every third speck of dust that falls on it, and is the ultimate fingerprint magnet at the moment (my PC is the current number 2). I wiped it 5 times ever since I got it.

All in all however, it is one lovely working/blogging machine. It is difficult to find games for it, difficult to get distracted from doing anything not work related on it and damn easy to switch between applications through Expose. The Mac lets you do your work only, and does that very well by leaving little to be desired. I find that most of the time I spend on my PC is finding a better piece of software or plugin to do something, and ending up looking at things that seem interesting, but are really JAPOC (just another piece of crap). On a Mac, I just don't get that feeling. Thus, in short, I am just so friggin productive on it.

If I ever make a living off this blog someday, the Mac is probably gonna be my favorite machine.

I know I'm a little late but bj0rN has started another AFM contest! He's going to enter national service soon (read: The Army) so he's gonna need all the support he can get! Go now and make him a song that he'll sing in the shower in the barracks! Of course, you'll also get to hear many other people singing away in their favorite tunes. Join now and let us bring t3h love to the people!