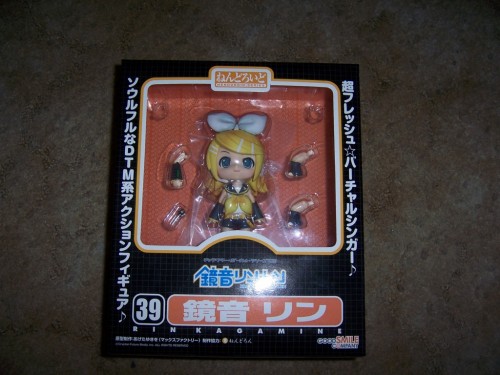 A friend of mine recently got me a Kagamine Rin nendroid by Good Smile Company. And it was the awesomest present ever. Here's some pics of me opening up the box to reveal the awesome blonde on the inside. For those of you who do not know who Rin is, she is one of the mascot characters of a computerized singing program known as Vocaloid 2, and is one of the twins Kagamine Rin and Len. Together they both form the second package of voices for Vocaloid 2. The first one being Hatsune Miku.

The nendroid comes in quite a nice black box with all the standard warnings and notices found on boxes that are used to package figures. The back of the box shows Rin's other twin Len. (I'm probably gonna get him too now that I have his sister) and the various faces that come with Rin. 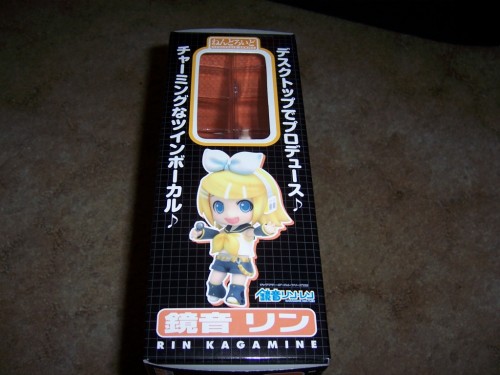 The side of the box is just a bunch of fillers, but that too includes a tasty version of Rin.

The other side of the box, with Rin XD'ing.

The top of the box. It looks the same at the bottom. This truly is the Rin packaging after seeing Rin being printed on every side. (duh)

When you open to top flap of the box, you can see instructions on how to change the figure's face. Pretty cool stuff.

Here is the plastic holder that resides in the box. As you can see its shaped to be able to store Kagamine and all the accessories for her. There are 2 premade faces and some arms and a microphone. It even comes with a blank face for you to draw anything you want if you are so inclined. It comes with a stand too, since the big head makes it difficult for Rin to stand alone.

I must say the stand isn't as elegant as I'd like it to be. Its more of a grabbing stand than an actual connector stand. I guess it isn't meant to be as elegant as a full-fledged figurine.

Here's Rin wanting a hug from me. *huggles* I guess now all we need is her shota brother and Miku to complete the circle.