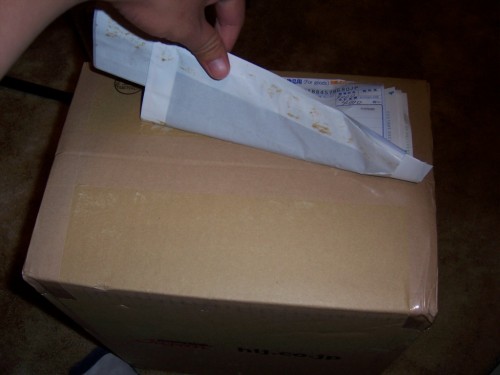 So another box came in today and Haruhi and friends all came jumping down the side of the shelf to see who's the newcomer into the Grand Chamber. I told them to be patient and wait for me to slowly peel off this shipment document from the box, which came off surprisingly clean.

Ah yes. The box is finally open. Good merchants always package their shipments in good hard solid boxes with thick layers of corrugated cardboard and seal the box as tight as a virgin loli.

Here I've pulled out the top 3 boxes. It looks like there's one more at the bottom. I think I should take that out too.

Ah yes. The Haruhi figure from Konami. It seemed like the odd one out since all (besides Mikuru) of my figures are from Max Factory (the best figure maker eva. says I. Since it was late, I decided see how Konami's packaging stacks up against the giants in a later post (perhaps a weekend post) and only open one figma tonight. Anyway, after I took all the boxes out, the kids immediately came running down and arguing over who to open first.

We all knew Nanoha's vote.

However, as always, Haruhi's voice comes down like thunder and starts shouting at Nanoha to not start deciding everything by herself. But we all know that Haruhi wanted the Konami box opened ASAP.

Of course, this ended up in a big argument, and some fights broke out.

In the end I decided to take control of the situation and made them all go back to their shelf. And I decided that I should open Fate tonight. Much to the dismay of everyone except Nanoha who was overjoyed and had stars in her eyes. The Fate T Harlaown figma comes in some very nice dark coloured packaging, corresponding to Fate's colours of black and gold, and in contrast with Nanoha's white and pink.

As always with figmas from Max Factory, the entire box is painstakingly adorned with beautiful designs and pictures of its contents.

The back of the box, designed to entice prospective buyers displays the huge number of possibilities with Fate. This figma is possibly the one which has had the most work go into it. Fate has Bardiche, which can be configured to up to 3 forms, or even more if you are creative. It also shows that Fate's cape is removable. A big plus since it really is big and unwieldly as a figma accessory. It looks cool nevertheless.

The big "figma" logo, which now I believe I can associate with undesputable quality and attention to detail in terms of action figures.

Finally, even the bottom of the box is not ommitted when it comes to decorations. The mark of a good product. The packaging isn't crowded with useless information and neither is any part half heartedly decorated just for the sake of filling it. This is a mark of class that few manufacturers have a claim to. Such other brands are Apple and Mont Blanc.

The packaging is so beautiful it makes me hesitate to open it.

More friendly reminders that this is a figma and we should not force it in to doing our bidding lest it breaks into pieces.

... and of course how to change Fate's face.

Inside is the standard plastic frame that holds Fate and all her accessories. Look at the number of things in there. I'll lay it all out to display later.

Right now I'd like to turn your attention to the piece of cardboard that is positioned behind the box in the packaging. She is beautiful isn't she?

Ok lets have a closer look at Fate. Her body is covered with little pieces of plastic that prevent the colors from running in case certain parts rub together too hard while the figma is in transit. I couldn't help but stare at her beautiful blonde hair for a while.

Here we can see all the accessories and fate laid out. The package comes with Fate, an extra hair and serious face, Bardiche as a lance, and a sword and Fate's cape, and her eight interchangeable hands, the cape spacer, the sword handle, the stand base and the stand pillar, and Bardiche in inactive mode. Phew.

Finally, here's Fate holding Bardiche in sword mode. (That's a freakin huge sword. I didn't finish watching Nanoha StrikerS. Maybe I should) I couldn't manage to keep my eyes open after this. I'm picking someone put sleeping powder in my tea. So I'll take some more pictures of finished Fate when I have more energy.