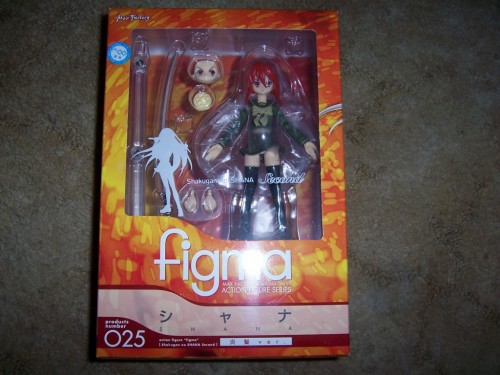 This time I'm gonna review my newly opened Shakugan no Shana figma. I actually opened this at the same time I opened Hayate, but soon after I opened Hayate I was left with only an episode of Index before bedtime so I decided to postpone this post. The next few posts will be about my newfound collection of Lucky Star characters. I'm not sure how I should do those posts since there are 4 of them. I might just do them all at once now since this site is fast becoming a figma bragsite, and no longer an anime blog. However, this post would probably still matter because there are probably some of you out there who are still deciding on whether or not to spend 2500 yen on Shana.

Again, like I always do, I take pictures of the front, left, right, back, top and bottom of the box just to show you guys what you'll be looking at if you ever decided to buy one of these.

Here's the back of the box, showing Shana with her katana and melon pan, and a very very tasty version of her kneeling down. I must do it once at least in my lifetime.

Unlike the top of the box.

Oh and one must never forget the big brand of my favorite action figures to date. On a side note, I've come across one instance where the figma brand did not deliver. Of course, I'm just hoping that this doesn't happen to me and that the people who sold the figure to me would take a certain level of responsibility over and defects that came with it.

Now lets move on to opening the box!

Standard flap telling you how to change Shana's face. Notice how the hair is now drawn to look like Shana's hair. Its the same for every other box, except the drawing is always similar to the character inside the box, and not just some generic head.

Woo I can see Shana inside! Waku Waku Doki Doki.

Here's a nice little background cardboard that came with it. These actually only came with Shana and the Nanoha characters. Surprisingly, it didn't come with the Haruhi cast. The Haruhi cast also had more simplistic, minimalist designs, whereas the others all had elaborate and beautiful pictures adorning them. I wonder why.

Here's the plastic that's holding the figma on the inside. As always, its held in from front and back. You can see an arm, Nietono no Shana, Shana herself, an angry face, a melon pan and 2 hands! Yes those two hands are used to hold the katana. The cool thing is, unlike the Hayate figma which only came with 8 extra hands, Shana has these 2 hands in ADDITION to the eight hands that are stored in just above the bag. How nice of them!

Here's after I opened the top plastic cover. The two hands are held in and sealed down using a piece of cellotape. Quite unlike figma to do something so patchy. But they did nevertheless hide it really well.

Closeup of Shana. Just look at the detail and how clean the paintwork is.

The hands. See the cellotape? I know right?

Here's Shana in the palm of my hand. Beautiful. She almost looks as if she was borne into this world by flame.

Just like the Shana 1/8 scale PVC by Max Factory, the Shana figma has got the same kind of hair as the PVC statue. Needless to say, Max factory has again given us something to talk about. The packaging style is also the same. Using a piece of plastic shaped just right to separate the body from the hair, they have managed to keep everything that moves pressed cozily against something.

More shots of the hair. I like the transition from solid figma colours to translucency. Very nice.

As you can see here, Shana is quite unique compared to her fellow figmas in the sense that the back flap of her uniform actually covers the hold which the stand arm should be penetrating. This is quite a strange design decision because it esentially says that Shana can't have an arm stand without folding the flap, which is not going to sit will with hobbyists.

Fortunately she comes with a small notchy thing that bends downwards a little to connect to the hole. The arm can then connect to this to hold Shana up. This actually results in some interesting possibilities.

Look at her drool over it. Wait no. For me? Why thank you! That's the first time a figma offered something in return for me getting her.

Here's Shana on a stand. As you can see here, I bent the arm in a less than usual way. Instead of arching over, I hold Shana up from below and use the arm's elbow to push her up instead. This actually allows her to stand on the ground without having to look down because the arm is pushing her hair up.

She's doing some kind of Katana form from the Shinmeiryuu Techniques.

I have finally learned how to diffuse my camera's lighting. Now I don't get the pictures too white without sunlight.

Here's Shana together with all my other weapon-wielding figmas. Ryoko lost her knife because Haruhi confiscated it for some reason. She's probably up to something again.

Overall, very nice figma. The paintwork was nothing like you saw in that DannyChoo post, and was so smooth it felt like I was animating her for a while. Just kidding. Definitely a good buy for Shana fans.