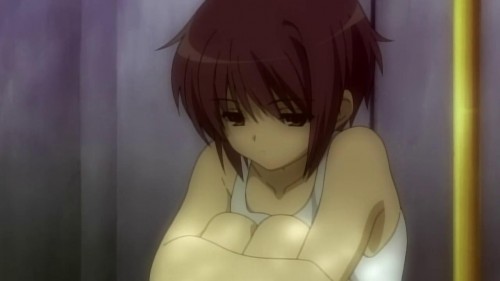 Kyon is wrong. He thought he sensed boredom in Nagato's slight expressions. Nagato's expressions this episode were neither bored nor slight. They were a very very obvious sign of hopelessness. Only God knows how dense everyone can be. Because this episode shows that free will indeed exists, among the 15000 instances of this loop, and because people did different things despite having the same initial state, while Nagato maintained state throughout the loop. So, one can only wonder what she's been through in those 15000 times.

Perhaps, about 1000 times into the loop, Nagato started to show signs of distress, and eventually sought help from Kyon. Perhaps even, Nagato would've gone into a state of panic, clutching Kyon's hands begging him desperately to work out what Haruhi really wants... Perhaps even doing some very erratic things, causing them to not be able to go the the O-bon dance festival, just in order to randomly pick out Haruhi's true desires.

Perhaps, that expression, that carried a slight hint of contempt, probably stemmed from one of the many thousands of instances where Kyon left her alone when she needed him most. Perhaps, after so many repeats, and so many attempts to stop the loop, she had given up.

Perhaps even there were times when the Integrated Data Sentient Entity resolved to punish her for interfering actively in the SOS brigade, essentially breaking the observation policies of the aliens, putting their plans in jeopardy. After that punishment perhaps, Nagato ended up beyond concern and beyond despair for her situation, and simply accepted it.

"Are you trying to hit on me now, like you did 135 times before this? You bought me that mask 250 times and even kissed me after everyone had left 70 times. I'm tired already. Just don't bother me anymore."

"You've tried to assure me that you would break the loop over 450 times now, 73 times I had trusted you and gotten closer to you."

"I had known emotion, and what humans called love within these many centuries passing, yet I had no choice but to discard it. Ironically doing it in a span of what you felt were just two weeks. I have gathered much information, but I still do not understand. Perhaps humans are less sensitive to emotions natural to themselves than they really seem"

And she spit out the statistics routinely as she did 15000 times before this. Despite already having a natural poker face, her expressions now when she recited the statistics of the loops were simply forces of habit created after repeating it so many times.

Perhaps she didn't think or say all that, being an alien with less-than human emotions after all, still if she was built like a human, she would experience certain inconsistencies in her feelings from having being bombarded by the same thing for 15000 times.

"My mission is to observe.", despite saying that she deeply wishes that Kyon and Haruhi would start realizing what they really want and stop giving her all that misery.

And Haruhi, despite knowing what she really wants, continues to beat around the bush for chances to be with Kyon.

And Kyon, being the blockhead that he is, continues to narrow mindedly spite Haruhi and her antics, despite knowing that she really is just a very insecure and very hot headed girl.